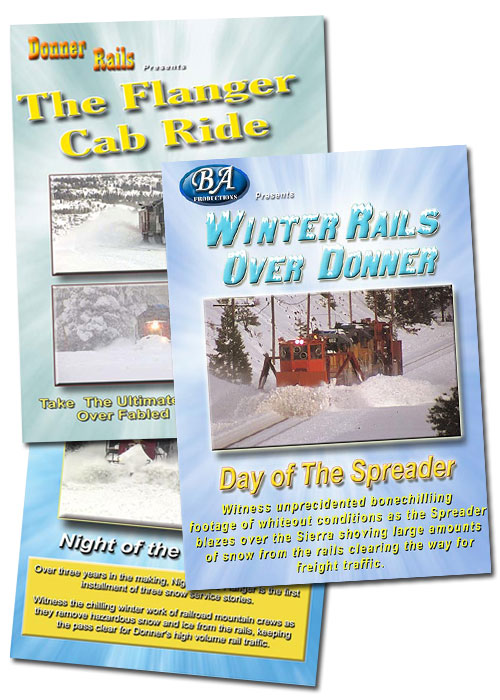 The Sierra Nevada is hit hard by fierce Winter storms dumping up to 35 feet of snow each Winter season. Storms on the summit can be treacherous and can take even the most experienced and prepared travelers by surprise.One of the most daunting tasks for the railroad is keeping the tracks clear of snow and ice.Dispatched at any time, day or night, Flanger trains are called to duty when storms produce a depth of snow six inches or more above the rail. Flanger operations require skilled and experienced operators who know this mountainous territory well. Operations work around the clock until the storm subsides.See first hand, unprecedented footage as we climb aboard the lead unit of a Flanger train in operation, and make a flip from Truckee to Emigrant Gap and back clearing the snow for mainline rail traffic!

Over six years in the making, "Day of the Spreader" is officially released.

The Union Pacific's Donner Summit line crosses the Sierra Nevada at over seven thousand feet. Keeping this "All Season Pass" open is vital to the railroad and California's economy.

When the snow gets too high for the Flangers to remove snow from the rails, the second line of defense is called into action. The Spreader is deployed to remove large amounts of snow from the mainline and shove it off banks and bridges clearing the path for new snow to fall. With the nose blade down, the wings extended out and a little speed, the Spreader will move a mountain of snow.

Harsh winters, temperatures in the low teens, snow falling forty eight inches in a single day and up to sixty five feet a year, have long been an obstacle to keeping trains rolling over the Sierra.

Learn some of the amazing history of Norden, Southern Pacific's former snow removal headquarters. See how employees lived under the snow all Winter long using covered connecting hallways to get from place to place.

Winter Rails - Night of the Flanger

The first of three epic snow service stories, this production sub-titled Night of the Flanger is available now.

Over three years in the making, Winter Rails Over Donner - Night of the Flanger tells the story of nature's bitter legacy of snow on the mountain each winter season and the railroad's annual effort to keep a green light burning on the mainline.

Witness white-out conditions through the diesel cab's rotating windows, forcing our flanger crew to pause their night operations to dig out switches in the light of their diesel ditch lights. Experience the spectacular camera views of the flanging operation as snow is shot careening over banks and bridges with breathtaking scenery in its path.

Hear the engineer & conductor explain details of the flanger operation. Experience what it's really like to ride inside the flanger "box".